Looking for national statistics for anorexia?
Here are some we have compiled including anorexia charts. 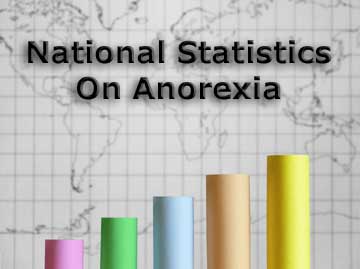 Anorexia is one of three eating disorders and is classified as a serious medical condition affecting about 1% of the female population. That may sound like a small number but it averages out to be 1 out of every 100 young women!

Anorexia rarely claims victims before puberty or after the age of 40. It is the third most chronic illness in young adults between the age of ten and twenty who are literally starving themselves, sometimes to death.

Let’s take a look at some of the National Statistics for Anorexia:

Eating disorders have the highest mortality rate of any mental illness and because of this fact some call anorexia a slow suicide. Only 1 in 10 people with an eating disorder will receive treatment and out of this number 80% do not receive treatment at the intensity they need to recover. The death rate associated with anorexia is 12 times higher than the death rate of all causes of death for females 15 –24 years old.

Maintaining a healthy weight is very important. Eating a balanced diet will help you feel more energized and help keep you alert. It will also help prevent diseases and health complications. Please review the 3 charts below for a clearer picture.

This chart actually shows what healthy dieting is compared to the eating disorder, anorexia:

This gives you an example of the amounts of food you should eat daily from each group. 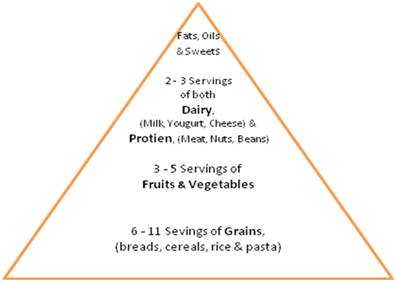 You Are Not Alone

Other Resources for Anorexia

You may also want to check out this website www.yourstory.info where others share their stories of struggling with anorexia and overcoming it.