Does it Impact Our Self-Esteem
and Body Image?

You may or may not have heard of the big debate about evolution versus creationism. We aren’t here to debate, but we do want to challenge you to consider its impact on girls today. Is there a connection?

Is there more to the onslaught of low self esteem and body image issues teen girls and women face today? Could there be something deeper going on?

We think there is...

We believe there is a battle for our souls.

And we believe it is a spiritual battle. A battle against good and evil. A battle waging in the heavens against God and Satan. For you. For us.

It’s subtle. Many times it comes through our thoughts. Subtle lies that we end up latching onto and believing.

Our enemy, Satan, may try to convince us to believe that…

What is the result?

Broken, lifeless, defeated lives. We may experience sparks of real life from time to time, but in general we live with a deep ache inside. A sense that we don’t belong. A sense that there’s something wrong with us. We know from experience.

The Connection to Evolution vs Creationism

What if some of these thoughts could originate from something even deeper?

What if our enemy convinces us to believe that science has found the answer to how our universe began. And that if science can explain our origins, we don't need any other explanation. It's as if there's been a debate between science and God, and we've been told that science wins every time, hands down.

And many of us have believed it.

We come to the conclusion that there is no need for an intelligent designer of our universe, that we are simply animals that evolved from lifeless cells millions of years ago.

You see, when we believe instead that there exists an intelligent designer or Creator of this universe that created us with love and value and thought, then we see ourselves differently.

How does evolution vs creationism impact us in our search for true beauty and meaning in life? Think about it. If you evolved from lifeless, meaningless cells over millions of years, does your life really matter?

But What If There Is More?

What if there is more to what we see all around us. Doesn't the beauty, complexity and magnificence of it all ever make you wonder?

Shelley found the following example written by Mark Cahill to be really helpful:

"When we look around the universe at things not made by man, what do we see? We see creation, design, art, and order. So if everything man-made has a creator, designer, artist, or orderer behind it, why would you not think there is a Creator, Designer, Artist, and Orderer behind the universe?

"Why is it that when we look at Mount Rushmore, we don’t say, ‘Wow, erosion is an amazing thing! Look how it formed the heads of four presidents of the United States’? We realize that would be a foolish statement. Whenever we see creation, design, art, or order, it’s obvious that there was some intelligent force behind it to make it happen.”(1)

Cahill then went on to tell this story:

“I was talking with a man one day in downtown Atlanta, and I asked him a question about spiritual matters. He replied that he was an atheist, and there was no way to prove there is a God. We were standing among tall buildings, so I pointed to one of the skyscrapers and said, ‘Prove to me that there was a builder for that building.’ He answered, ‘That’s easy. The building itself is proof that there is a builder.’…

I said, ‘Exactly. The building is proof that there is a builder.’ I then added, ‘The sun, the moon, the stars, the oceans, the sand, each unique snowflake, the 3 billion pieces of your DNA that are different from mine, are absolute proof that there had to be a Creator of this universe.’ He looked at me. I could see the light bulb flash on behind his eyes and then he glanced away. As he thought about the statement, he realized he had proved his own proof.”(2)

What Cahill was getting at is that just because you can’t see someone, doesn’t mean they don’t exist. Just like that building was proof that a builder existed, we are living proof that our universe has a Creator.

Dr. Rice Brooks, author of God’s Not Dead, used the example of pocket texting. Have you ever pocket texted someone? It used to be a lot more common before they came out with touch screen phones that were password protected. But essentially, you have your phone in your pocket and it randomly texts someone on your contact list because you brushed up against it.

Usually pocket texts are completely random; “jjjjjjjjjm” for example. The chances of texting someone a complete sentence that you haven’t said before are slim to none. Texts that make sense have to have someone actually type them out. Like the DNA in Cahill’s example. The chances of it randomly forming the building blocks of the human race are virtually non-existent. Someone had to orchestrate it.

So what if we had an intelligent designer, a Creator?

That would mean that...

Why I Can Trust the Bible as Truth

On one hand we are an insignificant accident, while on the other we were created on purpose and for a purpose.

But What About Science? 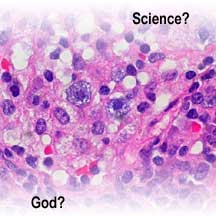 You may be wondering if this is all wishful thinking on our part. You could wonder about how we can ignore science in favor of faith. The answer is simple: we’re not.

The thing about science is, if you have an idea that you can explain and defend, then test it or observe it without finding it false, it can become a scientific theory. You haven’t proved it is a fact, you just haven’t proved it’s false. It can remain a theory until someone can prove it’s false. Thus, the theory of evolution and the theory of creation are both scientific theories that have supporting evidence. Neither one has ever been proven as a fact or found false.

They are scientifically equal.

In fact, there are ministries and organizations dedicated to proving each of the theories independently. But as of now, they are both considered scientifically sound, even though they can’t both be right. As we said at the beginning of this chapter, we aren’t here to debate. But we do believe that the difference between these two theories has a huge impact on how we see ourselves.

If you’re still struggling with the evolution vs. creationism idea, I recommend reading chapter two of Mark Cahill’s book, One Heartbeat Away, Your Journey into Eternity.  He explains microevolution vs. macroevolution, transitional forms and more. It helped me better understand why Creation really does make sense when you truly take the time to examine the claims and evidence of evolution. I realized that it really does take more faith to believe in the evidence of evolution vs. creationism.

If you're still struggling with the evolution vs creationism idea, Shelley recommends reading chapter two of Mark Cahill's book, One Heartbeat Away, Your Journey into Eternity.(3) He explains microevolution vs. macroevolution, transitional forms and more. It helped me better understand why Creation really does make sense when you truly take the time to examine the claims and evidence of evolution. After reading it, she realized that it really does take more faith to believe in the evidence of evolution vs creationism.

I (Heather) found the website Answers in Geneses helpful in my own search for understanding. Both are great resources.

Shelley and Heather have written a book...
specifically for teen girls -- and this book could change your life
or the life of a teen girl you know!

(3) You can purchase Mark’s book from Amazon here.

Return from Evolution vs Creationism to Teen Beauty Tips Homepage